The intention in Paliomylos is try to be self-sufficient in many aspects as possible increasing the consumption of food produced here and surroundings. In the villages on the slopes of the mountains, they cultivate a wheat  that local bakeries use and has the feature that produces a yellowish and tasty flour. We will use it to do our bread. Cultivate the cereal is in mind for the future, perhaps along the lines of olive trees. 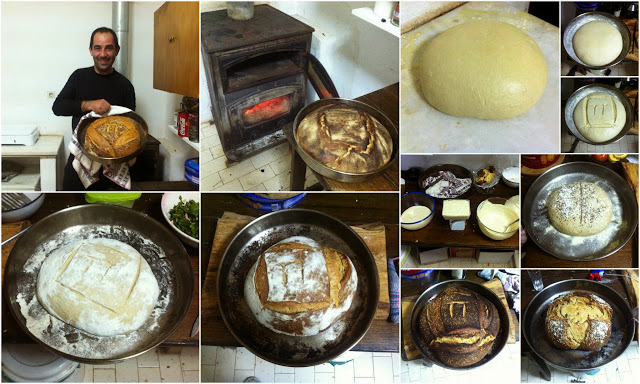 If you want to know the procedure that we follow, continue reading…

First thing is to prepare a sourdough to avoid using commercial yeast every time you go to make bread, which increases the cost and undermines its quality. The bread made with sourdough has characteristics that make it different from fermented dry yeast or fresh concentrated. The flavor is substantially better, and lasts many more days in good condition. In the recipe that will continue the flour is almost not kneaded, allowed to stand for hours, and fermentation lasts for long, creating those features that I mentioned earlier.

How we made the sourdough.

(This is not a tutorial, only an explanation of the  followed procedure)

To prepare the sourdough we followed the basic instructions that you can get from the network. The point is to make a culture with the yeast that is in the husk of the cereal. Mix whole wheat flour and water in the same amount into a glass jar to fill half. To increase the amount of initial yeast, we also add a few raisins as they have lots of enzymes on the surface of its skin. To hinder the growth of bacteria during the process, we put a squeeze of lemon juice, which gives some acidity to the environment. As the temperature inside the house is rather low, around 12 degrees, we placed the jar with the mixture near the fireplace to make the yeast feel more warm and decide to have many little children. After the first 24 hours any change is observed. We threw half the dough and incorporate as much of mixture of water and flour to the jar. At the end of the second day, we repeat the operation, also without observing major change. The third day bubbles begin to appear in the mass that are clearly visible. At this point remove the grapes from the dough, and proceeded to refresh as the previous days. The fourth day the thing has grown. The yeast is active and eats flour. The volume almost doubled. We refresh other half of the dough and the last day is the definitive: the mass does not fit into the glass jar and overflows. It is ready. We can keep it in the fridge or in our case, anywhere, as the temperature is not high. To use it, the day before we have to feed it with 50/50% mixture of flour and water in an amount sufficient to generate the sourdough that we need. 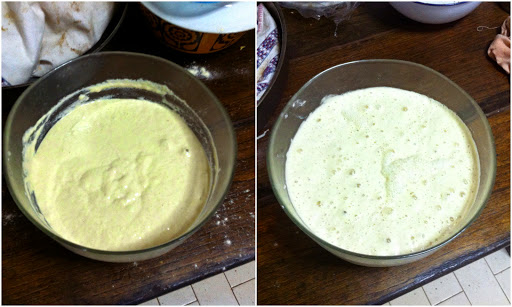 (Update: we lost the sourdough by accident. To make a new one we used normal flower mixed with some barley grains extracted from the straw bails. The result was excellent).

After reviewing various bread recipes made with sourdough bread, we were trying variations until the current process. In it, I include 40% as sourdough, as the temperature of the place is too low. The first few tries did not grow well with smaller proportion. The quantities of flour, water, salt and sourdough, per 1000 g. flour, are those of the following table:

(For this calculation, the sourdough will always be composed of 50% water and 50% of flour)

The steps we are: 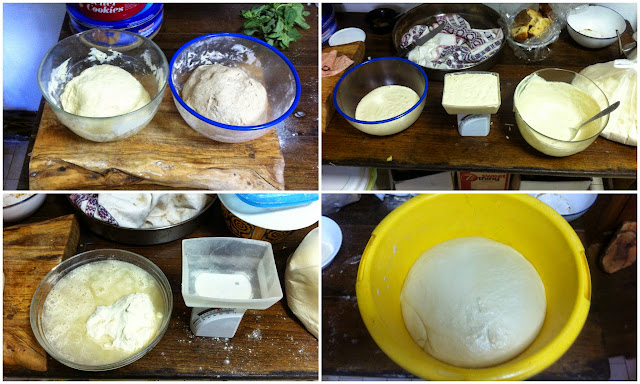 Without any temperature control in the wood oven, all we can do is put a lot of wood and wait for the oven chamber is as hot as possible. 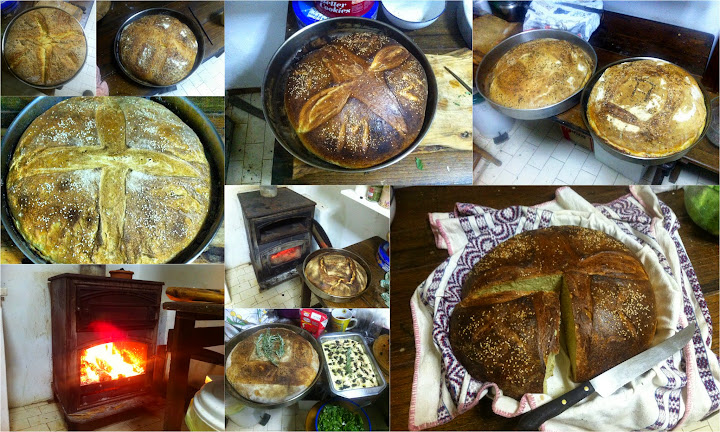 The capacity of this fantastic wood oven is not very big, and we can only cook about 3 kg of bread at once. Sometimes we make two loaves, one after another, hoping to increase the time between baking sessions, but rarely the bread lasts more than five days. This prevents us to verify that sourdough bread lasts longer. At least we know that is a lot tasty. Sundays is the baking day. We have institutionalized the pizza dinner day. Pizza varied, all leftovers of the kitchen. Sometimes no cheese … sometimes without tomato … sometimes with lots of everything, even meat! and also a vegan version. Coincidentally, many people began to come to dinner on Sundays. There is nothing better than a good slice of pizza to make friends: D 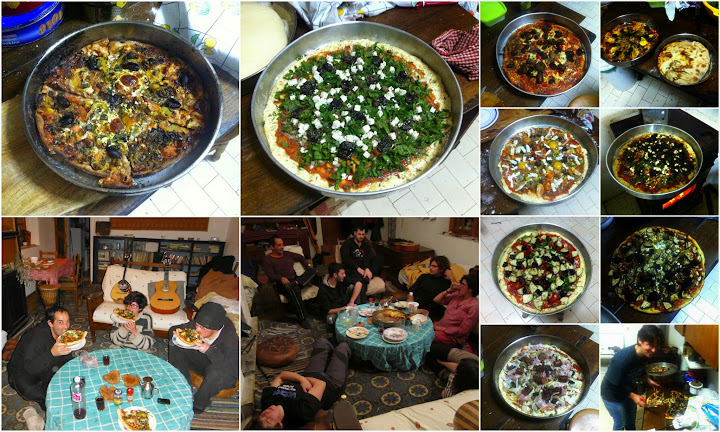